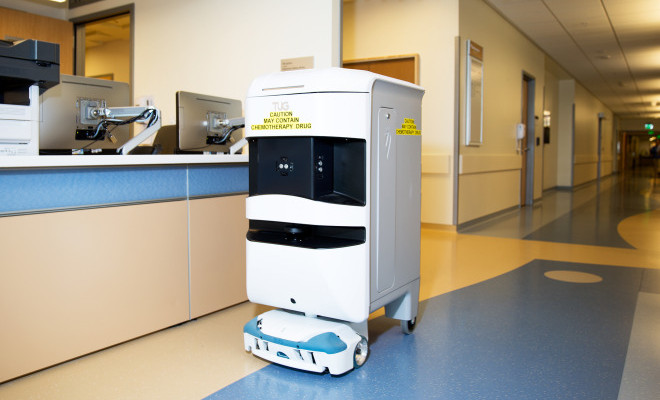 Mila was spending her vacant time surfing the web in an internet café. Both passing time and wanting to learn something new, she decided to search for the newest innovations in healthcare. She browsed through dozens of new technologies and discoveries when one particularly caught her attention: the orderly robot.

Whoah, cool. So they utilize robots now to act as orderlies? Now intrigued and curious about the device, she decided to open the link and read on about it. Who knows, she might just be able to encounter one in the future.

This may seem like a scenario from the future, but it’s not. A world where robots roam and perform duties which used to be performed by human beings is now slowly turning into a reality. The UCSF (University of California-San Francisco hospital) Medical Center at Mission Bay now has a convoy of more than two dozen, specifically 27 Tug robots delivering drugs, linens and meals and carting away medical waste, soiled linens and trash, reports Josh Valcarcel in Wired magazine.

They look a bit like R2D2, dragging a platform around behind of them. However, instead of drones, they are more like little flatbed trucks, ferrying carts of stuff around the vast hospital complex. It should also be noted that they do it more efficiently than humans.

According to Dan Henroid, who is in charge of this elite fleet and as the director of nutrition and food services for USCF Medical Center, each Tug travels about 35 miles each day. He pointed to a robot motoring by him, “This one is going up to one of the floors. It’s carrying meals that were ordered in probably the last 20 minutes.”Over the past year, they have made more than 157,000 trips through the hospital.

Twenty-seven infrared and ultrasonic sensors enable these robots to avoid bumping into people or blocking their paths. In particular, they stand back from elevators and summon them through the hospital’s Wi-Fi, using radio waves to open doors.

According to Henroid, no one in the hospital has lost a job to the robots. UCSF was in the middle of a hiring spree for the new hospital, but the Tugs allowed him to hire about 30 fewer workers than he would have otherwise.

He also pointed out that the robots are really just carting things from one point to another, something most humans would not find particularly rewarding. “The Tug has a job to do, and it’s sort of a thankless job. So, I think, better to have a robot doing it perhaps than a human,” he adds.

Drug Tugs securely deliver medications, and Linen Tugs haul was much as 1,000 pounds of laundry, and Food Tugs deliver 1,000 meals a day.

Though there are those staff who find these robots promising, there are also those who are not used to seeing such. Valcarcel, for example, who grew up in the Silicon Valley, says that even he finds the hospital robots “just weird.”

The robots have very little contact with patients as they mostly stay in the hallways or nurses’ stations, where human workers pick up their goods and deliver them to patients in person. However, when the kids in the children’s hospital catch a glance, it’s quite a scene.

The children like to climb aboard, and ride them around the unit. “When the robots come the kids start screaming ‘robots!’ and they follow them down the hall. And it goes down around the corner and opens the elevator and gets on by itself. So that’s like a magic thing for them,” Medical-surgical unit coordinator Michael Eckenrode said.

The Tug program has cost UCSF about $6 million overall, including the changes required to hospital infrastructure to accommodate the robots. But Henroid said they’re actually saving the hospital money. According to him, “The cost of transporting materials and supplies waste is an overhead cost. So the more you can do you that efficiently, the less cost you have.”

Currently, there are about 120 hospitals throughout the U.S. that are using Tugs, according to manufacturer Aethon in Pittsburgh, Penn.